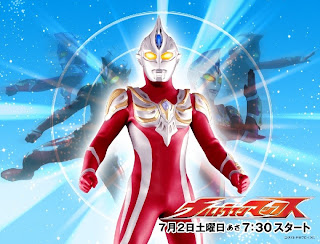 Ultraman Max (ウルトラマンマックス, Urutoraman Makkusu?) was an Ultraman TV series which started airing on 7 July 2005, and produced by Tsuburaya Productions and Chubu-Nippon Broadcasting Co., Ltd.. The show tried to return to the true formula of new monsters every week and being a fast paced show like previous series with the exception of Ultraman Nexus(Urutoraman Nekusasu,2004). The show is full of homages to past series by having three of the original cast members from the first Ultraman(Urutoraman,1966) series (and one original cast member fromUltraseven(Urutora Sebun,1967) being featured in an episode), updated versions of classic monsters like Red King, Eleking and Pigmon among others. One unusual episode (#29) revolves around the filming of the 1964 program Ultra Q(Urutora Q,1965) which was the predecessor to the first Ultraman show in 1966. Two actors from that show appear as themselves.

Home
Give us your opinion